Are we being silly just trying to meet the National Grid – 30/42GW targets?

It has often been said by Elon Musk that Tesla goes back to “First Principles” when trying to solve a problem that SpaceX, Tesla or Boring Companies might have.

I wonder if the U.K Government and National Grid are also missing a trick that has been pointed out in a report published by Rethinkx? These chaps have produce a report for the more technical for you here : Rethinkx Energy Report – 2020 to 2030.

Currently, in the UK we are trying to replicate the current Old Style systems without actually saying “should we do this a different way?” as the report above has suggested.

Basically they are stating the over provision of energy creation using Wind and PV Solar by a factor of 3 to 6 times using the “The Clean Energy U-Curve”  in any world region can be completed cheaply using renewables. But, there can also be additional benefits of adding a 10% or 20% over the original base provision that would provide a “Super Power” bonuses to the grid.

In the report on page 13 they provide a “USA Texas”  example, and after the recent events of 2021 blackouts in that part of the country. Despite to TV (Fox TV) blaming the Wind Turbines that only supply 2% of the overall energy. It actually was due to the Gas and Oil industry not removing the water from the Gas itself due to cost savings. Hence the cold snap froze the Gas in the pipe line and the coal plants also assumed that the wet coal wouldn’t freeze at any point! Yep, it’s the dam accountants again!

Seem timely? They state in their report that a $200 billion investment in Solar PV, Wind and Batteries would cover the annual power requirements of the complete Texas state period! When you consider the USA has just issued $1.9 Trillion (that 1,900 Billion in old money!!) in a package for COVID-19 it seems quite cheap!

Or, $109 Billion (£78.3 Billion again in real money) if we went for the Super Plus 20% version. This is based on the actual base load of 30GW which is confirmed in the figures of the National Grid 2018 here. This would replace all electrical energy needs for the UK! The National Grid could be supplied fully at all times from renewables!

Or, we could spend it on the estimated cost of HS2 which currently is  106 Billion. I get a train and a track!!! I know what I would spend it on. :o)

So, what’s the idea? Well, it works on the basis that everywhere in the world, the supply and energy creation can be worked out using predicted weather patterns.

So, in the report on page 13 they have pointed out that using the current Solar PV, Wind and not as much as most think of batteries to provide a super grid option in 10% or 20% versions. These 10 or 20% options would allow this lack of energy to disappear and be replace by the “we have so much we can literally waste huge amounts on producing other stuff at Zero or Negative pricing.” What this mean? Well for example you could produce all the Green Hydrogen to provide the heating via hydrogen to all of the UK households period!

You could wipe out Fuel Poverty in one sweeping change, at a very nominal cost to the General Public (HM GOV).  That’s You and Me by the way!!

You could allocate a base amount to each UK household for example  4k for Green Electric and 14.5K for Green Hydrogen Gas. Any more, then you pay extra for it, to stop wasteful usage by energy hogs. The bonus to HM GOV (Us) would be that the reclaimed household budget for energy savings made by each household on heating & lighting would probably be spent on items that were rated at 20% VAT rated rather than 5% as home fuel is.

I know what I would be doing. But, that of course is using commonsense !! There are way to many interested parties getting in the way.

The interested parties have billions of inefficient energy assets that will become obsolete in years time. As the Solar PV and Wind costs become cheaper which will happen anyway the requirement for Gas will drastically reduce as it did in coal. The interested parties current financial model works on 60-70% loading to make electricity in the £50-60Mhrs. When, the renewables will be able to produce at £20Mwhrs and still making a major margin. There is already a serious chance that the current Hinkley point Nuclear plant being built by EDF an China in the UK now will never get to supply ONE unit of electricity unless it is subsidised by HM GOV to save face in building a stranded asset in the first place. The current fixed price is  £92.50 per MWh. The average pricing for electricity in a year is £41.35 MWh. It today 16th March 2021 @ 10:55 am is £4.55 MWh. 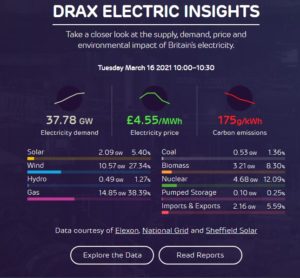 Even if the National Grid and UK Gov don’t follow the ReThingx report. Just like the ICE car industry is currently finding out they will become Asset stranded and bankrupt. Tick tock people.

I've worked in IT for over 30 years. As the owner of one of the earlier AutoDesk Dealerships, when Richard Handyside was the main UK guy in The Cut! We supplied complete CAD, Networks and visualisation systems to Corporate clients such as RIBAS, Channel 4, NHS, BBC, Merrill Lynch, COMET Plc, Morgan Stanley too mention a few. We also developed the graphical ADB system for the Department of Health and a graphically lead Asset system for Merrill Lynch. Subsequently became a contract IT Consultant in both Developement and Production area's for both Large and small businesses. Which is what I'm still doing.
View all posts by tagware →
This entry was posted in Energy Efficiency, Gas, HM Govenment, Lithium Batteries, PV, Renewables, Uncategorized and tagged FOXTV, Gas, grid, National, OIL, PV, solar, Texas, UK, wind. Bookmark the permalink.