Monitor your Electricity and Gas bills with Loop @ £69.

We have had this system for a couple of years now without issue and decided to spread the word in the UK. As some of our readers are slow in changing their energy provider. :o( Tut Tut.

The system comes in two parts. One for the electricity install and a second for the Gas meter.

The idea is to set up the electricity one first which is the Orange coloured box and then the blue one after which is the Gas supply.

They provide a couple of YouTube video’s that guide you through the process. It sounds scarier than it really is honest.

The Gas after you’ve installed the Electricity!

So, what are the benefits?

You’ll be pleased to hear that the 2.4 or 5Ghz Wifi will not be used. It uses a 433Mhz band that should allow it to reach most places from the router.

You plug the base unit into the Broadband Router. Thoughtfully they have allowed this to be a pass-through type. So, if you are short on the number of connections on the router. This allows the device that was plugged into port to be so after.

This is powered via a USB which most routers now have. Once this is done the base unit talks back to the internet server. You need to take a note of the Id on the base unit before you do this though! The process then after connecting the clamp on the electricity supply is reasonably painless. You go through a sign-up process on the website. Which, will ask for that ID number that you should have taken note of!

One should note. That the clamp goes around the wire and doesn’t have any physical connection to the supply. Hence you don’t need an electrician. The same applies to the Gas meter. Which, once you have completed the Sign-up and got the electricity supply part working. Gas monitoring is achieved by following a setup procedure via the website. You have to know the type of Gas Meter and its Metric or imperial. But, these are quite easy to distinguish. As they supply the details along the way during the setup. Then, they just need to know the MAC address which is printed on the side of the Gas monitor. The setup routine does ask for this before they ask you to connect the monitor to the Gas meter.

Once you have connected the monitor to the Gas meter. All that is needed is to push the button on the device itself. Which, kicks off the setup routine. You need to turn up the Thermostate to make the boiler kick into life. Then, the system checks that it can establish that the dial that spins on the Gas meter is picked up. After a cup of tea (15 mins), this should report that it has established this. Then, you can return the Heating Thermostate back to where it was.

It obviously has an App for both Apple and Android which allows you to monitor how much Gas and electricity are being used both in real-time and over Day, Week, Month and Year. You can see a YouTube video of its features here

You can also set up the Budget using the Web interface to set a predetermined budget. For 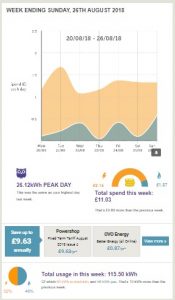 example, you might pay £80 a month to the utility. You can set this as a budget to the charging period. So, you can keep a check on how far you have got on the budget. It also will send you a weekly report on how you are doing.

After a couple of weeks. It will start comparing the tariff that you told it you were using to others on the market and report any benefit you might want to investigate.

Now like all comparison websites. Because of OFGEM, they assume once you come off a Fixed rate tariff, that you stay on the standard rate. Which, I think is misleading and OFGEM should know better! However, that said. It will nag you to check every so often if you can get a better deal.

As you can see here. 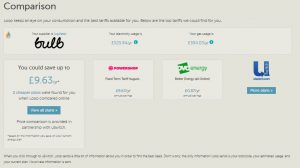 We are currently with Bulb which is a variable rate that uses 100% Renewable Electricity and Gas as much as it can. They aren’t necessarily the absolute lowest. However, they do provide a good email service on the occasions that I have asked a question or two.

If you use this link Here – then they will credit your new account with £50 and also pay any cancellation fees up to £150 per service. Providing you supply them the PDF bill. There is no charge to leave. So, whilst they can’t stop increases that do occur. They are well aware of people migrating away if they increase it too far. After all most of the clients were sign up due to the costing in the first place!

It a nice simple system to keep an eye on your energy charges for £69 and does a lot more than the current SMART Meter systems that are currently being rolled out at great cost to the UK consumers.

They keep saying that the Government is doing this. But that’s our taxes being wasted as far as I’m concerned. With the little benefit to the consumer and lots for the energy companies.

You could do quite a lot with 11 Billion. Even set up a fund at 6-7% return with that 11 billion would probably pay or subsidies the energy costs for OAP or not well off parts of the community for the for seeable future. How’s that for SMART thinking?

Well, I hope this has pushed you to at least look at the cheapest devices that actually monitors and pushes you in the right way to keep your energy costs down.

I've worked in IT for over 30 years. As the owner of one of the earlier AutoDesk Dealerships, when Richard Handyside was the main UK guy in The Cut! We supplied complete CAD, Networks and visualisation systems to Corporate clients such as RIBAS, Channel 4, NHS, BBC, Merrill Lynch, COMET Plc, Morgan Stanley too mention a few. We also developed the graphical ADB system for the Department of Health and a graphically lead Asset system for Merrill Lynch. Subsequently became a contract IT Consultant in both Developement and Production area's for both Large and small businesses. Which is what I'm still doing.
View all posts by tagware →
This entry was posted in Energy Efficiency, Heating, News, Renewables and tagged Android, Apple, budgeting, Electricity saving, energy, Gas, Loop, monitoring, realtime, reports, SMART, uswitch. Bookmark the permalink.