Upgrade to Optimised PV? Or, stick to upgrading to the SMA SB2.5-40?

Well, it had to happen at some point. Our PV system went offline on the 7th of May and it has taken us this time to sort it out.

The system was working fine. Then, I notice that there was no energy being created via the meter that we have in the kitchen. :o(

So, looking in the event logs showed that just before it went offline the system noticed that the Varistor was faulty. This, in the end, was a Red Herring. But, at the time we didn’t know this. So, after some chasing around. We got referred to SMA Service department. They arranged for these Varistor replacements for the inverter. The Varistor protects the inverter from high voltage should a lighting strike or more likely induce high voltage spike in the PV cabling.

So, these are the little things. SMA must know that these will give out as they had a section in the manual about it. So, 5 days later they arrive. So, up we go and replace them after turning off all the Isolators both on the DC and AC sides.

Take the old ones out and replace them with the new ones. Making sure we get them in the right way around as it does make a difference!

Put it back together thinking. Great be back online again. I’m still not seeing a Green light on the inverter. :o( Not even a flashing one. Well at least the Bluetooth works! I then checked the DC side voltage after not being able to get hold of the original installer. This read ‘0’ v DC. This is the last thing any PV installation wishes to see. As it tends to suggest that the Panel or cabling has become faulty in some way. After checking out as suggestions to me by John from 1st Solar. The first thing was to check that the PV 4mm cable had not worn by being passed over the roof tiles. Thankfully the installer had made provision by cutting out a 25x25mm slot out of one of the roof tiles to ensure that never happens.

Second, was that in 2010 there were a couple of types of connector that got used. MC3 was known to have issues as it had rubber base surroundings. From 2011 type MC4 was mandatory on any MCS installations. However, the Photo Solar Technology Ltd PS240M-20/U’s came with type 4 connections. So, that wasn’t going to be the problem.

My installer called me to ask if I could take a reading of the DC voltage on the other side of the isolation switch. He said for some reason, and nobody has come up with why. The DC isolators can fail after time and he expected this was what the issue was. So, I duly to the reading and photo this grand event! ‘0’ v on the DC. :o( 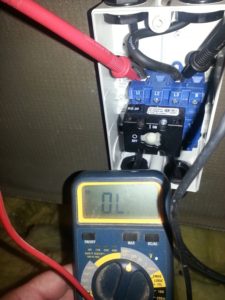 Well wasn’t happy. Anyway, as it looked like we might have to venture out onto the roof to find the fault. :o(

But, can the eagle eyes of you notice what is wrong with the Meter reading?

I’m pleased to say my installer did! He noticed that I had set the DC meter set to the 200VDC range rather than 700-1000V DC. The giveaway was the LCD showing overload on ‘L’. Ho hum….. I knew there was a reason why I went into IT rather than electronics. Once, this glaring error was corrected. The voltage came in at 325 at 0.75amps. So, quite enough to kick off the inverter. But, of course, that wasn’t reaching the inverter as the isolator had gone faulty. :o( It seems to be a mystery why this happens. As the switch hadn’t been moved in 7 years. Must be something to do with ‘Kicks’ that happen on a snooker table!

Whilst the installer James was scratching his head on the picture. I had started looking into the PV Optimisers. What are they? Yes. Me to. :o)

Well, basically the PV is very similar to the batteries in your domestic kit. The worst battery tends to dictate the output of the whole. So, if one of your PV panels is not feeling well as inefficiency. Then the rest follows. Also, although we don’t suffer shadowing here really. If one of the panels in sunlight but the others aren’t then this power tends to get wasted. What Optimisers do is rather than taking all of the 10 Panels as one. It individually adapts the optimiser to the panel level. Therefore, you get the best out of each of the 10 panels. So, sort of socialism into conservativism? Now what happened in the past was that they produce inverters with multiple inputs. So, you could then have one string in sun and the other not and still produce the amount of energy from the string until the other one saw daylight.

Anyway, the reporting of the state of each panel is sent back over the wire to the control unit that now just needs to concentrate on the conversion to the Grid. Now if you have a shadow for any reasonable time on part of the array I can see the benefit. However, when we found out that the inverter was dead and we didn’t need to get any scaffolding. I lost interest. :o(

As the expense of scaffolding and possible failure of one of the cables once the optimises were refitted. As they would still use the same cables. i.e disconnected and re-connected the cable. You tend to have issues later on. Although they did provide a 25-year replacement. But, I read that didn’t include the scaffolding costs. Which, would be in £400-500 against the unit replacement of £45. So, the guaranteed bit was a bit shallow in my mind.

However, both quotations came in at around £3K without the scaffolding. So, even with the expected improvements of up to 25%. This was in shadowing installations. Which, isn’t the case at our location. I would need over 10 years to pay back the expenditure. As the actual equipment was around £1K at the trade price. It did seem a tad rich. We produce around 2,000 units a year @ 0.65 per unit. At 25% which wouldn’t be the case, it was £325 a year.

If it had been saying £2-2.5K including VAT and scaffolding. Then, perhaps I might have gone for it.

So, if I was going to do anything it would replace the complete set of 10 panels with SolarWorlds 290w at £108+VAT. Or, when the inverter dies again, to replace the inverter with a 3K and 10 x 330w panels with optimised equipment fitted. But, that will not happen until 2030. As that is when the payment for FITs is completed for our site.

Once, I found out that the outside panels were good. They seemed little point in upsetting what has been a reliable installation up to now. So, I choose to purchase from CCL another SB 2.5 SMA inverter at around £851 including VAT (20%). We did better. But, still, at least it was 2K cheaper!

SMA did offer me a replacement at 475 Euros +VAT & P&P. However, this would have been the same type of inverter as the original with only a 12-month warranty.

Well, it didn’t weight as much as the old one coming out did! However, 7 years has made a lot of difference to both the design and features.

You can also monitor it from outside using the https://www.sunnyportal.com Obviously, they have an APP for that! They have also updated the overall system so it handles shadows better and it can also handle energy management of both batteries and domestic devices. So, perhaps when the cost of lithium or RED goes down I’ll look into that option.

So, all in all. I think I choose the right option this time.

We now can see what going on remotely as well!

Well, that’s it from me. I better go clear the place up!

Have a nice weekend.

I've worked in IT for over 30 years. As the owner of one of the earlier AutoDesk Dealerships, when Richard Handyside was the main UK guy in The Cut! We supplied complete CAD, Networks and visualisation systems to Corporate clients such as RIBAS, Channel 4, NHS, BBC, Merrill Lynch, COMET Plc, Morgan Stanley too mention a few. We also developed the graphical ADB system for the Department of Health and a graphically lead Asset system for Merrill Lynch. Subsequently became a contract IT Consultant in both Developement and Production area's for both Large and small businesses. Which is what I'm still doing.
View all posts by tagware →
This entry was posted in Energy Efficiency, PV, Renewables, Solar Array. Bookmark the permalink.