Well here we are again, 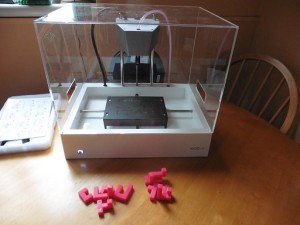 After a short break from Blogging, we can report that this printer is still performing well.

It took a little while for the Firmware to become stable. But, the current version seems to complete most builds now.

We have switched from using Cura to Slic3r V1.2.9 as we found that this package seems to work without issue when slicing the models.

I settled on using Autodesk’s 123D Design program which can be used freely and exports the STL files that the Slic3r can convert to G-code files. You can use the MOD-t printer utility to upload the G-Code to the printer via the MOD-t Printer Tools/Settings/Advance button using a connected USB cable.

You should have this utility loaded on the PC as part of the original setup of the printer. This way gives you more control over what settings are used. Rather than rely on the Manufacture New Matter Cloud site.

The only negative is that you have to connect the Laptop to the MOD-t whilst the G-code is uploaded. Against, the New Matter servers talking to the printer via the wireless adapter built-in.

The printer seems to have quite a sizeable memory. As we have been able to upload what seems quite complex G-code files and still be able then to remove the USB. Before pressing the flashing button to start the process off.

We amended the Slic3r with the Platform size of 150 x 100 and gave it the origin offsets x-75 & y-50 to start from the middle point of the platform. As previously we hadn’t and this made a bit of a noise as the printer tried to print off the platform. Once, we grasped this issue. The 3D build processed without issue.

We made a couple of tweaks to the file. Which we have uploaded for anyone else to use. You can open the page by clicking on here.

Then select the text and copy and paste to a file with .INI at the end of it.

We stop it drawing around the actual model. This was ok at the start a learning process. However, once we started using the full platform size the printer was again trying to print in fresh air again. So, we turned that off in this config.

We have raised the first lay temperature to 215’C for the first layer. We left the next at 200’C which again seems to work well.

Under the speed section, we reduced the speed overall to 20%. Whilst this sounds very slow. We don’t now have issues of the 3D model detaching itself from the platform since this was adopted.

We have undertaken to produce a 3D printed Turbine which was produced by this chap here. 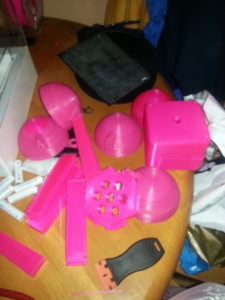 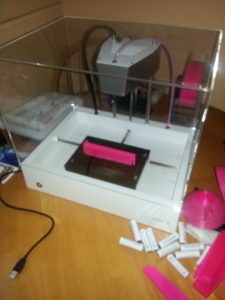 As you can see. We shouldn’t lose it anytime soon. We still have a couple of parts to complete before we are able to start the build process of actually making power!

We will report back once we have completed the printout. Even show it in action in Sunny Banstead!

I've worked in IT for over 30 years. As the owner of one of the earlier AutoDesk Dealerships, when Richard Handyside was the main UK guy in The Cut! We supplied complete CAD, Networks and visualisation systems to Corporate clients such as RIBAS, Channel 4, NHS, BBC, Merrill Lynch, COMET Plc, Morgan Stanley too mention a few. We also developed the graphical ADB system for the Department of Health and a graphically lead Asset system for Merrill Lynch. Subsequently became a contract IT Consultant in both Developement and Production area's for both Large and small businesses. Which is what I'm still doing.
View all posts by tagware →
This entry was posted in 3D Model, 3D Printer, David Vincent, MOD-t, PLA, STL, Twitter and tagged 123D, 3D Printer, G-code, New Matter, NewMatter, slic3r, STL. Bookmark the permalink.