Got PV on the Roof? Reduce your water heating bill. By diverting the PV Export power you are giving to the Grid.

Been some time, I know.  I thought I would share iSolar Boost a new device for you guys to save more money on your fuel bill.

So, if you have a Gas System, rather than a Gas combi heating system, this is for you. If you use electricity or Gas to heat your water then read on…….

Why does the boiler system matter?

Well generally the Gas Combi system, heats your water to the point of requiring it. This has its benefits, in that it doesn’t waste energy, heating a water tank that doesn’t get used.

However, for those that don’t. Here is another way of bringing down your water heating bill.

If you have PV in the UK you will know that we get some money back on the energy that we export to the UK grid. This is normally provided at 50% of the actual amount that your generation meter states, for systems that are under 4kW in size. Which, is most UK domestic installations.

Initially, this seems a fair amount. However, as the export rate is currently in at £0.045per unit. You don’t get a great amount. As the electric Co get to charge your neighbour 14-15 pence for each unit they use, which you created. That also includes you in the evenings! Besides the additional 20% that they would have to generate to get that amount to the end user. I think they are doing well out of this deal!

However, if you could transfer some of that exported energy into something useful? You still get the exported amount. So, you lose nothing, but you could also heat up the hot water tank.  Now that would be worthwhile as it would save on the Gas or even better Electricity bill!

Well, there are several devices, that are available to do such a job. 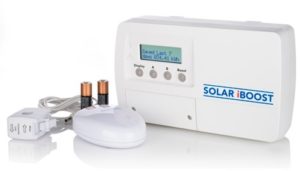 The one I choose after some research was the Solar iBoost – Free Hot water from your PV / Solar Array – Immersion controller.

It costs £199.00 + VAT & Postage and comprises of a wireless monitor that taps to the incoming power supply in a similar way to the Electronic Monitoring devices, that tell you how much electricity you are using do.

The device itself is fed directly from the electric supply going to the Hot water tank. This device just sits in between. The power is increased and decreases automatically. So, you never import electric!

Or, in my case. I utilised another MCB from the consumer unit. As we didn’t use the electrical heating element in our Valiant tank in the first place. We just allowed the Gas boiler to complete the job. As that was cheaper than using the electric option.

The tap on the incoming power supply measures how much electricity is being exported. If, there are more than 200 watts. Then, the small box diverts the additional amount of power into the Hot water tank. It takes around 7 units to heat the water of a 150-litre tank to 60’C.

But, this device utilises the smallest amount of energy, but always keeps that 200-watt buffer. So, as soon as you turn on the kettle to make tea for example. It shuts down and allows internal energy to be used before any electricity import occurs. It may not heat the complete tank to the 60’C during the day. But, it will certainly build the heat of the water up. So, when the Gas boiler does fire it doesn’t have to use so much gas to heat the water to 60’C. If you use electricity to heat your water it will save you even more!

So, on my small PV system of 2.4kW, it generally heats the water enough for the Gas boiler not to fire up in the evenings.

It’s been installed since the beginning of August and has generated 62 kWhrs of heat in 17 days! Currently, there is 1.6kW worth going into the tank as I write. On one day it said ‘HOT Tank‘ which means that it made it to the 60’C!

So, if you have a PV system that is greater than 2kW+ in size. I think this device is a no-brainer not to install – ASAP!

So what are you waiting for? Order yours Today here

Well, that’s me done for now. As usual. Leave a comment and I’ll bounce a reply if you have a question.

ps. There are others devices that are cheaper. But, they have more of a trust element to them. As the device I have recommended, has a display for you to check the amount being put into the tank at that moment. Along, with the Weekly, Monthly and All time generation. This allowed for the device to be mounted by the Hot Water Tank and allows for the monitor tap to be in the meter cupboard downstairs. Just seems a cleaner install.

I've worked in IT for over 30 years. As the owner of one of the earlier AutoDesk Dealerships, when Richard Handyside was the main UK guy in The Cut! We supplied complete CAD, Networks and visualisation systems to Corporate clients such as RIBAS, Channel 4, NHS, BBC, Merrill Lynch, COMET Plc, Morgan Stanley too mention a few. We also developed the graphical ADB system for the Department of Health and a graphically lead Asset system for Merrill Lynch. Subsequently became a contract IT Consultant in both Developement and Production area's for both Large and small businesses. Which is what I'm still doing.
View all posts by tagware →
This entry was posted in Energy Efficiency, PV, Renewables, Solar Array and tagged 30%, Free, Gas, Hot, PV, Saving, share, solar, Water. Bookmark the permalink.