Meter Plug – A small Green Device that saves you both Energy and Money! 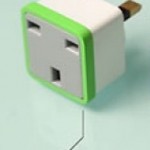 We have another twist on the Blue tooth Stick-N-Find that we spoke about several weeks ago.

This time is it a little UK plug that reports back to your phone the energy that is being used.

Just plug this device into the socket and then plug in the Fridge, TV, Heater, Phone charger.

Download the APP to your Bluetooth 4.0 phone on both Android and Apples OS.

Then sync the Bluetooth to pick up the plug device. You can call the Plug anything you like. So, for example. Could call it Kitchen, Sitting or Bedroom.

Then watch the display feedback the energy that is being used. You can control up to 20 of these green plugs from one phone. 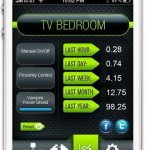 Keep a check on that hidden cost even when you are not in the room.

There may be appliances acting like vampires sucking up energy even though the power is switched off. If you leave your Xbox 360 or PlayStation 3 on, it will continue to consume roughly 170 watts of power, 24/7. That’s about £193 per year!

While testing MeterPlug, we found out that our 50″ Sony LED TV consumes £18.25 pear year on Standby.

You can program it to turn off an appliance when you walk away and turn back on and you walk in.

By using MeterPlug, you can find appliances that cost more to run than others, allowing you to calculate better when to run your appliances and for how long. This way, you can understand what appliance is causing your Electric bill to be so high, and where you can save.

The vampire power shield also prevents your appliances from using excess power when you aren’t using them!

Set-up an Alert or auto-off, when a specific device’s running cost goes over a pre-selected amount.

Built-in memory(If no Syncing with the phone): 2 months Log storage of all events.

I've worked in IT for over 30 years. As the owner of one of the earlier AutoDesk Dealerships, when Richard Handyside was the main UK guy in The Cut! We supplied complete CAD, Networks and visualisation systems to Corporate clients such as RIBAS, Channel 4, NHS, BBC, Merrill Lynch, COMET Plc, Morgan Stanley too mention a few. We also developed the graphical ADB system for the Department of Health and a graphically lead Asset system for Merrill Lynch. Subsequently became a contract IT Consultant in both Developement and Production area's for both Large and small businesses. Which is what I'm still doing.
View all posts by tagware →
This entry was posted in Energy Efficiency, Renewables. Bookmark the permalink.